A Short Guide to the Steinmueller Universe 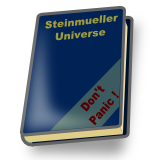 After its big bang in 1979, the Steinmueller Universe expanded slowly but steadily: novel by novel, story by story. Its spatio-temporal extension is presently about 10.000 years x 1.000 lightyears.

In principle, the predictions of the Club of Rome are correct: The 21st century will bring much hardship to mankind: climatic changes, desertification, pollution, widening gap between industrialized and developping countries, depletion of resources, regional wars. Despite gentech, artificial intelligence, exploration and exploitation of the solar system, especially the asteroid belt, the desintegration and partial breakdown of human civilization is imminent.

As Earth, struck by ecological desaster, looses interest in space, planetary bases, space habitats, and Space Fleet technology centers on Luna and the Jovian moons try desperately to attain self-sufficiency. Throughout the asteroid belt, the first race of genuin space living humans (zero gravity humans) evolves - perhaps under the invisible guidance of extratemporians? Maybe, they visited Earth at the beginning of the twentieth century (novelette "The Ultimate Voyage").

As its last proud and desperate enterprise, old Earth civilization launches a first wave of space colonization: by means of giant, slow, von Neumann type spacecrafts. Some planets in other solar systems are settled in this way. In one remote system the spaceship bred adolescents terraform the planet Andymon and establish their own dynamical utopia. Alas, the conflict between the technologically minded first generation and the second one of rural settlers shatters utopian harmony. All attempts to get into touch with old Earth or other space colonies fail.

An Encounter with Aliens

On Pulaster the Space Fleet encounters a species of intelligent dinosaurs, the Hreng. Old Hreng myths imply that after a planet-wide war the Hreng deliberately renounced technological progress and established a neolithic culture with rigid taboos against use of metals, against violating the all-generating Swamp - this could awaken the evil Sleeping Giant. But the Fleet needs and constructs a planetary basis on Pulaster, employing Hreng as assistant work force, in addition some Fleet scientists suppose that there is a relic of the extratemporians in a Hreng sanctuary.