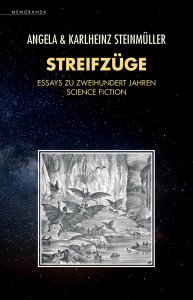 The German subtitle promises essays about two hundred years of SF, but the essays cover really much more than just two centuries. The expedition starts deep in the 17th and 18th century with the French voyages imaginaires that depicted societies on the Southern Continent and other remote places sometimes in an utopian, sometimes in a satirical vein. Many discoveries follow suit. Did you know:

You find at Memoranda.eu a (German) presentation of the book and a (German) reading sample.