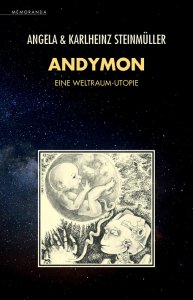 At first glance, the planet Andymon is a frightening disappointment for the children of the Ship: An uninhabited and dead planet, some hundereds of lightyears from Earth. For thousands of years the Ship had crossed these immense voids of space - only to find a dead stone! The Ship had produced them from fertilized egg-cells in the last stage of the large voyage, it had educated them to be settlers, and now, there was nothing to settle on! But Beth and Gamma and their sisters and brothers do not dispair. The decide to transform the planet Andymon, to terraform it into a second Earth. Despite most advanced biotechnologies, this takes years and years. But there is no easy way to utopia ...

For the new 2018 edition, the text has been cautiously revised. The volume contains also a postface about the origin of the novel and an essay "Andymon and the Long-Term Prospects of Mankind".

In 1989, Andymon was voted "the best East German SF novel of all times" by East German SF fans. In 2019, the team of Tor-Online included the novel into the collection of the "100 besten Science-Fiction-Bücher aller Zeiten" (100 best SF books of all times).