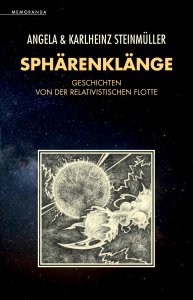 The volume tells new stories about the universe of Spera, Pulaster and Andymon and covers the history of the Terrestrial (and more than Terrestrial) Space Fleet from the beginning in the 22nd century to the fifth millennium, and, in the last story, even much longer. In terms of space, the setting extends from our solar system over many different worlds - and the empty space between them - to a planet without a name which belongs to the star Iota Draconis, well over 100 lightyears from Earth.
Just discover outer space as it never has been! Get involved with: Signals from the extratemporians – Conspiration of the vessel AIs – Semantic sanitation of a robot – Worlds at absolut zero – Lost in infinity – People without puberty – Gorgeous view of the Oikumene.

The Astronaut
Skewed Lines
Specialist for Classical Languages
URM 6754 and the Celestial Sounds
Far Form Ganymed. Wake Period 7. Red Night
Themis: Development Stage 2
61/4b: Encounter With the Potentiels
Rite of Transience
Under a Black Sun
The Relativistic Ones
Iota Draconis IV
Watchers of Worlds
Appendix: Chronology of the Relativistischen Fleet

Four of the twelve stories have been published earlier in collections and an anthology. They are indicated in italics. They all have been revised for the present edition. More informationen (in German language) at SF-Personality.