Ready for the Museum ...

As Time Goes By: History Exhibition with Steinmüllers

At first, the Traumfabrikant, a trophy the Steinmüllers had been awarded, went into an exhibition about „Science Fiction in Germany“ which was shown at the "House of History" at Bonn and in the Forum for Contemporary History at Leipzig. The Traumfabrikant (Manufacturer of Dreams) is a head of glass, that had been given to the Steinmüllers in 1988 by the East German fans for their "oeuvre" - at least, it was the rather complete "oeuvre" from the East German epoch. 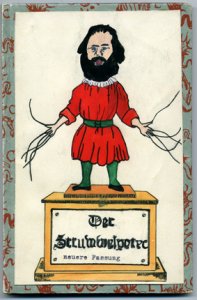 Later, in 2012, Leipzig was celebrating 100 years of the Insel Book series. For this anniversary, the department of "Book Sciences" of Leipzig University - directed by Prof. Siegfried Lokatis - produced an exhibition 100 Jahre überstanden! Inselwelten ("100 Years and Still Alive. Insel-Book Worlds“). A specific section was devoted to the destruction on Insel books.
Between 1972 and 1989, Karlheinz had used the bindings of Insel books to produce individual specimen for Angela with pseudo-lyrics and fictious topics like "First & Last Annual Congress of Gnomistics" or "Robot Manners Handbook". Prof. Lokatis found that this kind of Insel book destruction qualified wonderfully for the exhibition. Therefore, the Steinmüllers took part in the inauguration of the exhibition „Neue Inselwelten“.