A Really Far View Into the Future

Futurology deals primarily with burning problems of the present. But even a speculative look into the distant future allows insights. Which basic development paths, biological-evolutionary, technological, social, are conceivable for mankind? Where are existential dangers lurking? What does the "silence of the universe", the absence of extraterrestrial super-civilizations, tell us about our own future? - K. Steinmüller dealt with these questions in his lecture "The Very Long View - Futurology from the Other End of the Time Scale" at the Future Slam 2016 of the Futur Institute of Freie Universität Berlin during the Long Night of Science on June 11, 2016. 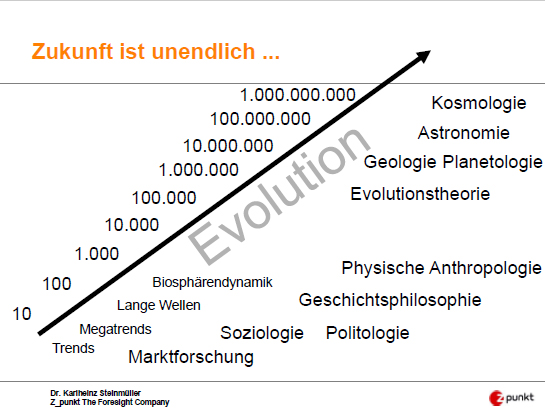 K. Steinmüller was inspired, among others, by the British philosopher and SF author Olaf Stapledon (1886-1950), who became known above all for his fictional history of future humanities "Last and First Men" (1930) - many millions of years into the future - and recently (October 2017) a longer article by Steinmüller about Stapledon's cosmic philosophy, entitled "Interplanetary Man", was published in Dieter B.'s "Interplanetary Man". Herrmann and Christian Gritzner in the volume "Beiträge zur Geschichte der Raumfahrt. Selected Lectures of the Space History Colloquia 1986-2015".

Since the trafo Wissenschaftsverlag has managed to suppress all 24 footnotes in the printed version and with them the sources despite correct upheaval, the complete version of the article is reproduced here .